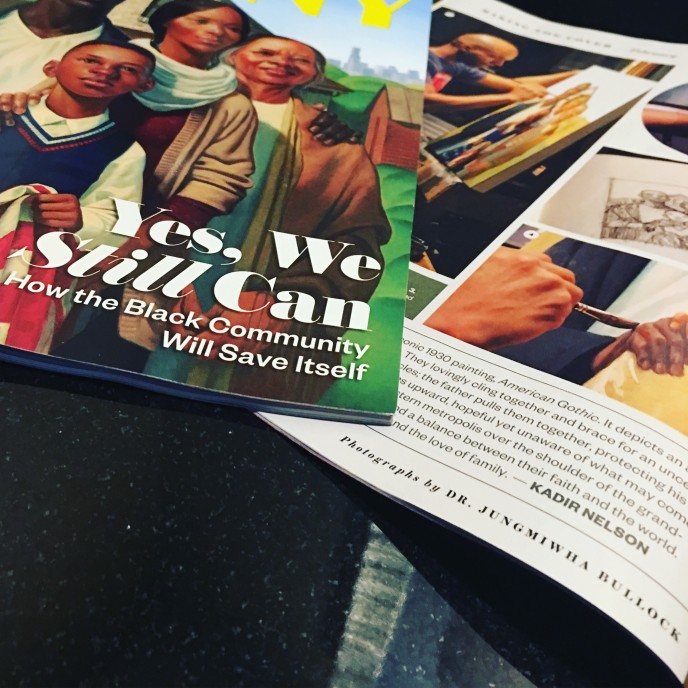 Chicago, IL | February 2017 – If you haven’t done so already, be sure to check out this month’s issue of EBONY Magazine, “Yes, We Still Can”, which features Kadir Nelson’s original painting, “Black Gothic”, on the cover, and my process photos documenting the creation of the painting in the interior, “Making of the Cover” page (p. 20).

A big heartfelt thank you to EBONY Magazine and its’ amazing staff for the wonderful partnership, and for giving a nod to our collective work in this much-needed issue following the most recent series of events in this country, from the election to the endless marches as of late, which calls attention to voices that need to be heard now more than ever.

Kadir’s cover painting is a contemporary interpretation on Grant Wood’s iconic 1930 painting, American Gothic, which shows a sprawling metropolis in the background, with the oh-so-familiar image of the farming couple with the pitchfork in the foreground. His vision “depicts an affluent African-American multigenerational family in front of their brick home. They lovingly cling together and brace for an uncertain future. The mother and grandmother look on, preparing the family for obstacles; the father pulls them together, protecting his family, the young boy, with the help of his mother, holds and American flag. He glares upward, hopeful yet unaware of what may come. The steeple over the shoulder of the father, juxtaposed with a sprawling Midwestern metropolis over the shoulder of the grandmother, denotes the challenges all families face as they move forward trying to find a balance between their faith and the world. The paintings offers a glimpse into American ideals, African-American patriotism and the love of family.”

Upon completing this project, which I find very much speaks to the confluence of social justice and consciousness-building, is to continue my goal for 2017 of having other PhDs and scholars as myself reimagine our work in social justice within the media–even more than ever–so we can do our part to educate the masses beyond our ivory towers on issues abound.

Meanwhile, please do pick up a copy and enjoy this issue with the accompanying cover story, which is a timely take on where we’ve been, where we’re at, and where we are headed, especially if we ALL come together sooner, rather than later, around all voices that matter.